Joan Gray’s journey for making jewellery started when she decided to work for herself and after having tried sewing, knitting, gardening, embroidery, making toys and pottery had not tried jewellery.  After her daughter did her degree in silver smithing, she showed Joan how to make a pair of earrings and that’s were Sterling Crafts began.

In 1992, Joan was the first one in the North-East to sell at craft fairs with beaded jewellery and in the Town Hall in Durham where she is originally from.  Since 2017 Joan also started drilling Seaham Glass.

Joan still has the largest selection of Beaded Jewellery in North-East and after 30 years still selling jewellery at craft fairs and in the Gift Shop at the Durham Dales Centre. 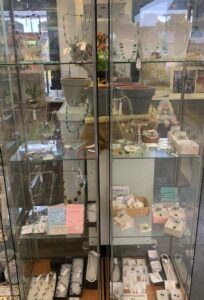 Here at the Durham Dales Centre we welcome thousands of visitors each year. Take a look below at some of our lovely feedback.

Nice little gift shops and a great cafe have a nice all day breakfast and some great Sunday dinners all at a good price!

Plenty of parking, nice shops and café very good food. We used the centre as a base for a walk around the quarry then back for food.

The staff are always pleasant and helpful (even when run off their feet). The menu has a good selection and the food is homemade, would recommend the mince pie with all the trimmings.